I recently came across a question on a website about Six Sigma: What should be the primary objective - customer satisfaction or cost reduction?  The question still causes a lot of confusion which is quite prevailing among the Six Sigma practitioners.  I pondered upon the same and found that I am quite not agree with the question itself.

I realized that being on the technical side of Six Sigma, it always seems to make more sense to carry Six Sigma undertakings for the purpose of reducing costs. Then thinking of passing on the benefits incurred to the customers and strive to enhance customer satisfaction. If we make progress along this thought-line, then no doubt there would be cost-reduction benefits obtained.

Yet this is the same thought-line which, after giving initial cost-reduction advantages, has failed either to provide sustenance of benefits, or bring about desired change in overall culture of organization. There are profound examples of companies which adopted six sigma, but failed to become truly Six Sigma companies. They've always wondered--how other companies like GE, Motorola (with its second avatar of Six Sigma practices) have been far more successful in this arena of Six Sigma.

The prime-most reason has been that they focused most of their Six Sigma efforts/initiatives and projects on less-important Y's driving their companies. They failed to correctly embrace Six Sigma from right vantage points.

First, they didn't realize that it should stem from company's Big Y's where customer's successes (even more than satisfaction or loyalty) is paramount to the company itself. Second, they failed to see their process from the point of view of-- 'Where' and 'how' their own processes adds & contributes to customers' successes.

Well, they must learn to forget viewing their own processes as internal processes and essentially see them as small processes in the scheme of things at their customers. This understanding is far more broader and enriching than their current understanding of VOC as they know it. And they should design their Big Y's from this understanding and all the projects or drill-down metrics should be derived from that only.

The following text has been collected and published only to clarify the real Six Sigma approach to question.

(Jack  Welch, was chairman and CEO of GE Corporation. His speech was presented at the GE 1996 Annual Meeting in Charlottesville, Virginia, on April 24, 1996, and published in the August/September issue of Executive Speeches, 1996. This speech is regarded as a milestone of Six Sigma history in the world. The part of his speech which is related to quality and Six Sigma is given here.)

The business performance of 222,000 employees worldwide has made us very proud as well. 1995 was another outstanding year for the company by any measure: a 17% growth in revenues to $70 billion, 11% earnings growth to $6.6 billion, and earnings per share up 13%. Our shareowners had a 45% return on their investment in 1995. GE, whose market capitalization already was the highest in the U.S., achieved that status globally in 1995, and is now the world’s most valuable company.

Self-confidence and stretch thinking were two of the key factors that encouraged us to launch, in 1995, the most challenging stretch goal of all the biggest opportunity for growth, increased profitability and individual employee satisfaction in the history of our company. We have set for ourselves the goal of becoming, by the year 2000, a Six Sigma quality company, which means a company that produces virtually defect-free products, services and transactions. Six sigma is a level of quality that to date has been approached by only a handful of companies, among them several in Japan, with Motorola being the acknowledged leader in this country.

GE today is a quality company. It has always been a quality company. Quality improvement at GE has never taken a back seat. We have operated under the theory that if we improved our speed, our productivity, our employee and supplier involvement, and pursued other business and cultural initiatives, quality would be a natural by product. And it has been. It’s gotten better with each succeeding generation of product and service. But it has not improved enough to get us to the quality levels of that small circle of excellent global companies that had survived the intense competitive assault by themselves, achieving new levels of quality.

This Six Sigma journey will change the paradigm from fixing products so that they are perfect to fixing processes so that they produce nothing but perfection, or close to it. Typical processes at GE generate about 35,000 defects per million, which sounds like a lot, and is a lot, but it is consistent with the defect levels of most successful companies. The number of defects per million is referred to in the very precise jargon of statistics as about three and one-half sigma. For those of you who flew to Charlottesville, you are sitting here in your seats today because the airlines’ record in getting passengers safely from one place to another is even better than six sigma, with less than one-half failure per million. However, if your bags did not arrive with you, it’s because airline baggage operations are in the 35,000 to 50,000 defect range, which is typical of manufacturing and service operations, as well as other human activities such as writing up restaurant bills, payroll processing, and prescription writing by doctors.

The experience of others indicates that the cost of this three to four sigma quality is typically 10%–15% of revenues. In GE’s case, with over $70 billion in revenues, that amounts to some $7–10 billion annually, mostly in scrap, reworking of parts and rectifying mistakes in transactions. So the financial rationale for embarking on this quality journey is clear.

But beyond the pure financials, there are even more important rewards that will come with dramatically improved quality. Among them: the unlimited growth from selling products and services universally recognized by customers as being on a completely different plane of quality than those of our competitors; and the resulting pride, job satisfaction and job security from this volume growth for GE employees.

Six Sigma will be an exciting journey and the most difficult and invigorating stretch goal we have ever undertaken.  The magnitude of the challenge of going from 35,000 defects per million to fewer than four defects is huge. It will require us to reduce defects rates 10,000 fold – about 84% per year for five consecutive years – an enormous task, one that stretches even the concept of stretch behavior.

Motorola has defined a rigorous and proven process for improving each of the tens of millions of processes that produce the goods and services a company provides. The methodology is called the Six Sigma process and involves four simple but rigorous steps: first, measuring every process and transaction, then analyzing each of them, then painstakingly improving them, and finally rigorously controlling them for consistency once they have been improved.

Following Motorola’s experience closely, we have selected, trained and put in place the key people to lead this Six Sigma effort. We’ve selected our “Champions” – senior managers who define the projects. We’ve trained 200 “Master Black Belts” – full-time teachers with heavy quantitative skills as well as teaching and leadership ability. We’ve selected and trained 800 “Black Belts” - full-time quality executives who lead teams and focus on key processes, reporting the results back to the Champions. We are beginning to train each of our 20,000 engineers so that all of our new products and services will be designed for Six Sigma production. And we have, at our Leadership Development Institute at Crotonville and at our businesses, an unmatched educational capability to train all 222,000 GE people in Six Sigma methodology.

We have a work-out culture in place at GE that is ideal for highly collaborative action-based team efforts, which will enhance our Six Sigma programs. To emphasize the importance of this initiative, we have weighted 40% of the bonus compensation for our managers on the intensity of their efforts and their progress toward Six Sigma quality in their operations. To date, we have committed $200 million to this effort, and we have the balance sheet that will permit us to spend whatever is required to get to our goal. The return on this investment will be enormous. Very little of this requires invention. We have taken a proven methodology, adapted it to a boundaryless culture, and are providing our teams every resource they will need to win. 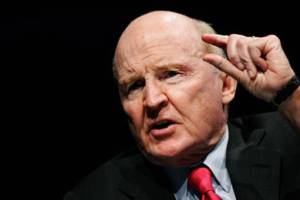 Six Sigma – GE Quality 2000 – will be the biggest, the most personally rewarding and, in the end, the most profitable undertaking in our history. GE today is the world’s most valuable company. The numbers tell us that. We are the most exciting global company to work for. Our associates tell us that. By 2000, we want to be an even better company, a company not just better in quality than its competitors – we are that today – but a company 10,000 times better than its competitors.

That recognition will come not from us but from our customers.

Six Sigma – GE Quality 2000 – is a dream, but a dream with a plan behind it. It is a dream that is increasingly inspiring and exciting everyone in this company. We have the resources, the will, and above all, the greatest people in world business who will make it come true.

As the author of this post, my own point of view is that until and unless, companies embrace the similar approach for their Six Sigma endeavors, they won't be able to think of high-hanging fruits, forget even to touch those. I'm of the opinion that the quest for cost reduction is just like loosing the entire dimensions of Six Sigma in the maze of lowly-hanging fruits.