Shareholder value is a result, not a strategy 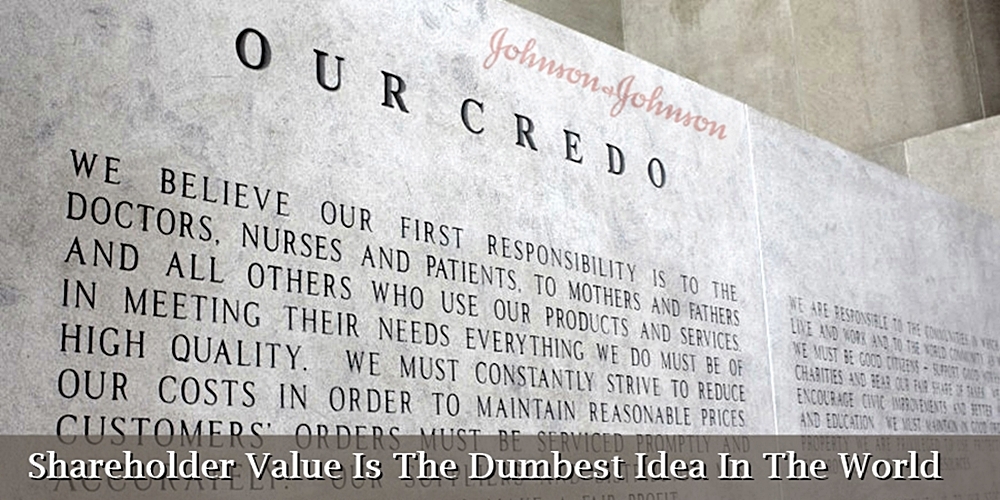 In March 2009, the ‘Financial Times’, the leading financial newspaper of US published a series of articles on ‘The Future of Capitalism’.  It published an interview with Jack Welch, who is widely regarded as the father of the “shareholder’s value” movement, has said that the obsession with short-term profits and share price gains that has dominated the corporate world for over 20 years was “a ‘dumb idea”.

The birth of the shareholder value movement is commonly traced to a speech Jack Welch gave at New York’s Pierre hotel in 1981, shortly after taking the helm at GE.  In that famous speech, entitled “Growing Fast in a Slow-Growth Economy,” Jack Welch outlined his beliefs in selling underperforming businesses and aggressively cutting costs in order to deliver consistent profit rises that would outstrip global economic growth.  He told analysts then, “GE will be the locomotive pulling the GNP, not the caboose following it…,” according to reports of the speech.

Jack Welch said in the interview given on 11-March-2009 that he never meant to suggest that setting, and meeting, profit expectations quarter after quarter in an effort to boost a company’s share price should be the main goal of corporate executives.

“It is a dumb idea,” he said. “The idea that shareholder value is a strategy is insane. It is the product of your combined efforts - from the management to the employees”.

What he was talking about is the commonly held belief that the purpose of business is to increase shareholder value. That belief is variously attributed to Milton Friedman, Adam Smith, and perhaps common sense.  BUT, it was the operating principle that resulted in two market busts and innumerous scandals in the past decade. The fact that Welch was one of the main proponents certainly adds a fair amount of gravitas to his comments.

Profitability, shareholder value, and measures like economic value added (EVA) completely miss a point that Welch articulated so well. Namely, increased “shareholder value” is a result, not a strategy.

It is substantially contrary to business school doctrine.    Some noteworthy researches have shown that ‘Maximizing shareholder’s wealth” or “profit maximization” has historically not been the dominant driving force or primary objective through the history of some of the great and enduring companies such as HP, Motorola, Johnson & Johnson, Boeing etc and many more.   For them, it was not like that they were uninterested in profitability or long-term shareholders wealth.  They were and are “more than” economic entities, not “other than” economic entities.

Let’s dig a little deeper.  John Young, who was the Chief Executive of Hewlett-Packard (1976-1992), he also had told in an interview:

“Maximizing shareholder wealth has always been way down the list.  Yes, profit is a cornerstone of what we do—it is a measure of our contribution and a mean of self-financed growth—but it has never been the point in and of itself.  The point, in fact, is to win, and winning is judged in the eyes of the customer and by doing something you can be proud of.  There is a symmetry of logic in this.  If we provide real satisfaction to real customers—we will be profitable.”

Similarly, Robert W. Johnson, who founded Johnson & Johnson in 1886, also started with the idealistic aim “to alleviate pain and disease.”  By 1908, he had expanded this into a business ideology that placed service to customers, and concern for employees ahead of returns to shareholders.  In 1935, Robert W. Johnson, Jr., echoed these sentiments in a philosophy that he called “enlightened self-interest”, wherein “Service to customers comes first……. Service to employees comes second……and service to management comes third………service to the communities comes fourth, and service to stockholders comes last.”   He codified the J&J ideology in “Our Credo”, and it was printed on old-style parchment and captioned in the same lettering used in the American Declaration of Independence.  “When these things have been done,” he wrote, “the stockholders should receive a fair return.”

We believe that our first responsibility is to the doctors, nurses and hospitals, mothers and all others who use our products. Our products must always be of the highest quality. We must constantly strive to reduce the costs of these products. Our orders must be promptly and accurately fielded. Our dealers must make a fair profit.

Our second responsibility is to those who work with us -- the men and women in our plants and offices. They must have a sense of security in their jobs. Wages must be fair and adequate. Management just, hours reasonable and working conditions clean and orderly. Employees should have an organised system for suggestions and complaints. Supervisors and department heads must be qualified and fair-minded. There must be opportunity for advancement -- for those quaified and each person must be considered an individual standing on his own dignity and merit.

Our fourth responsibily is to the communities in which we live. We must be a good citizen – support good works and charity, and bear our fair system of taxes. We must maintain in good order the property we are privileged to use. We must participate in promotion of civic improvement, health, education and good government, and acquaint the community with our activities.

Our final and last responsibility is to our stockholders. Business must make a sound profit. Reserves must be created, research must be carried on, adventurous programs developed, and mistakes paid for, adverse times must be provided for, adequate taxes paid, new machines purchased, new plants built, new products launched, and new sales plan developed. We must experiment with new ideas. When these things have been done, the stockholders receive a fair return. We are determined with the help of God to fulfill these to the best of our ability.

You might be tempted to believe that this credo was mere a nice-sounding platitude—words with no bite, words meant merely to pacify, manipulate, or mislead.   You are rightful to think so, because such great words of idealisms are printed upon the platitudes at almost every company today and everywhere.  You please don’t get lost into the maze of corporate mission, values, objectives etc, as these have become more of a fashion statement or me-too practices.

But the crucial point is idealism has long existed in some of the most remarkable companies, decades before these become part of business & management text books.  But these companies exhibited ever stretching idealism with well-founded pragmatism in search of their profits and value for shareholders.

Remember, these companies institutionalized their ideologies in their actions & practices.