Globalization and international trade, along with advances in information technology, have dramatically increased competition worldwide. To compete in a global market, firms must be equipped with the latest technology, up-to-date information, skilled employees, and advanced managerial skills.  Many organizations emphasize quality as a means of staying competitive in the marketplace in the long run. They view that having a reputation of high quality is like representing future market-share for new customers and maintaining the market share for existing customers over their lifetime. Further, improving quality can provide long-term financial savings, such as scrap and rework reduction. We associate these quality savings as long-term savings that are difficult to quantify. One method to quantify quality is the initiative known as Six Sigma. SIX SIGMA has been the single most-adopted approach for most organizations in last 10-15 years and is the fastest-growing approach in the organizational quality field that has come of age.

LEAN SIX SIGMA (LSS) is a methodology that allows organizations to ‘maximize shareholder value by the fastest rate of improvement in customer satisfaction, cost, quality, process, speed, and invested capital’. It is a combination of well-known waste elimination and process improvement techniques of Lean manufacturing and Six Sigma.

What is Six Sigma?

It is a process that is so well understood and controlled that 6-standard deviations will fit between the average output and the customer-specification limits. The main purposes of using the Six Sigma process are listed below:

This approach can be defined as the relentless pursuit of process variation reduction and breakthrough improvements that increase customer satisfaction and impact the bottom-line.

The standard framework for implementing a Six Sigma is define, measure, analyze, improve, and control (DMAIC) process.  In this approach, key process input variables are narrowed to a vital few. Having control of a vital few allows for good control of the whole picture. DMAIC is widely used when a product or process already exists but performs inadequately. This management strategy seeks to make an organization more effective and efficient.

DMAIC focuses on eliminating unproductive steps, developing and applying new metrics, and using technology to drive improvement. Six Sigma has a strategic component aimed at not only developing employees’ commitment to it, but also actively involving a higher level of management.

The strategic component of Six Sigma, requires management to identify key processes in its organization, measure process effectiveness and efficiency, and initiate improvements to the worst-performing processes.

Six Sigma is a practical methodology for reducing cost, improving quality, and fostering continuous improvement in the product/process. Because Six Sigma originated through quality, it provides time-tested tools that have enabled continuous improvement for organizations such as GE and Motorola that lead to better performance. Also, it has been widely used by companies which are looking to achieve higher level of customer satisfaction and profitability. This research suggests that due to previous acceptance of Six Sigma by other companies, the ability to produce bottom-line savings, and its foundations in quality would remain very strong. 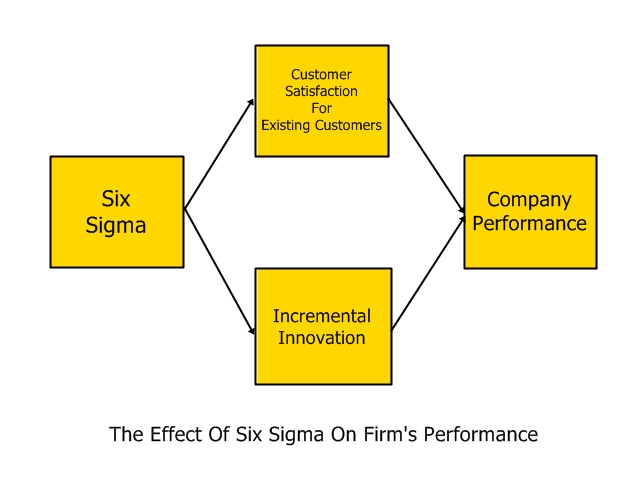 From product quality program to firm-wide decision-making strategy, Six Sigma is ‘the corner-stone’.

Six Sigma’s popularity and acceptance came through the work of Jack Welch, former CEO of General Electric (GE) in 1995. He observed the success experienced through Bill Smith’s approach and intensely championed and led the implementation of Six Sigma methodology in GE. He not only championed the approach, but also utilized the personnel-driven belt systems (Green Belts, Black Belts, etc.) as a means of identifying high-level directors and managers at GE in the future. Consequently, companies such as Allied Signal, Honeywell and GE adopted this methodology with huge bottom-line results. This further popularized the concept and many business strategies were reframed that led to considerable financial success.

Extensive publicity by 1998, including emphasis in annual reports on Six Sigma, is associated with Bill Smith and Motorola in the late 1980s, and subsequently popularized by GE and Jack Welch in the early 1990s. Six Sigma initiatives implemented by Motorola helped save them $940 million in three years. GE earned around $2.5 billion in the year 1999 by implementing Six Sigma. Honeywell followed the concepts of Six Sigma and saved $1.5 billion in the year 1997.

Other implementations that popularized Six Sigma include companies such as: 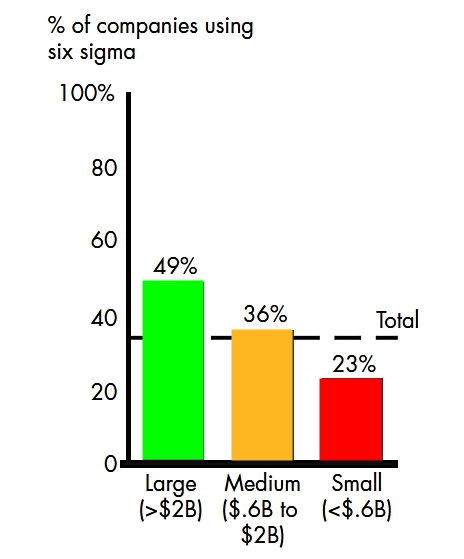 As a methodology for improving both factory output and quality, LEAN SIX SIGMA has gained widespread popularity.  The LSS approach is being used to vastly improve processes, profitability, sustainability, and long-term growth at global organizations of all sizes.

Most of the top companies listed by Fortune 500 magazine integrate Lean and Six Sigma ideologies in all of their operations. Some of them are 3M, Amazon.com, Bank of America, Boeing Frontiers, Caterpillar Inc., Dell, Eastman Kodak Company, General Electric, Honeywell, and so on.  In fact, IBM, Motorola, and GE, etc. offer solutions to businesses based on their type of industries. All these Fortune 500 companies have been extremely quick in bringing LSS best practices to their India operations.

Lean thinking is fundamentally derived from the Japanese quality movement, specifically at the Toyota Production System (TPS) and was hugely popularized by Womack and Jones (1996). This approach to manufacturing began shortly after the World War II, and was created by Taiichi Ohno, while he was employed by the Toyota motor company. Many Japanese companies such as Toyota were hit by shortages after World War II in both capital and resources. Lean principles were established by Sakichi Toyoda around the same time (1920s) as quality principles were being accepted and implemented. It gained popularity in the American industrial setup where companies chose to exploit the economies of scale and increase production without concern for variety in products which was much needed in the Japanese setup.

This encouraged copious amounts of scrap and inventory as the objective was to achieve maximum throughput at a given time. In other words much waste was created which gave rise to more problems, such as loss of time and money in rework due to defects and holding costs that had to be dealt with.

All Toyota’s employees were instructed to eliminate waste. Waste was defined as 'anything other than the minimum amount of equipment, materials, parts, space, and time which are absolutely essential to add value to the product’.

Through a process of trial and error, Ohno would create a new manufacturing paradigm—the Toyota Production System (as reported by White and Prybutok 2001). The TPS became the dominant production model to emerge from a number of concepts around at the time. As a result of the International Motor Vehicle Program (IMVP) benchmarking study, and the work of Womack et al., US and European companies began adapting the TPS under the title of just-in-time (JIT) to remain competitive with Japanese industry.

Look Beyond Your Organisation

“A Lean process is one in which the value-added time in the process is more than 25% of the total lead time of that process.”

Lean practice can be used in all processes in any type of industry or organization to improve their efficiency. It is applicable to all stages in a supply chain and is thus collectively called the 'Lean Enterprise', which can be understood as a extended business system for organizing and managing product development, operations, suppliers, and customer relations across the full extension of complete supply chain. Your business and other associated organizations, all collectively, strive to use lean principles, practices, and tools to create precise customer value — goods and services with higher quality and fewer defects — with less human effort, less space, less capital, and less time than the traditional system of mass production. 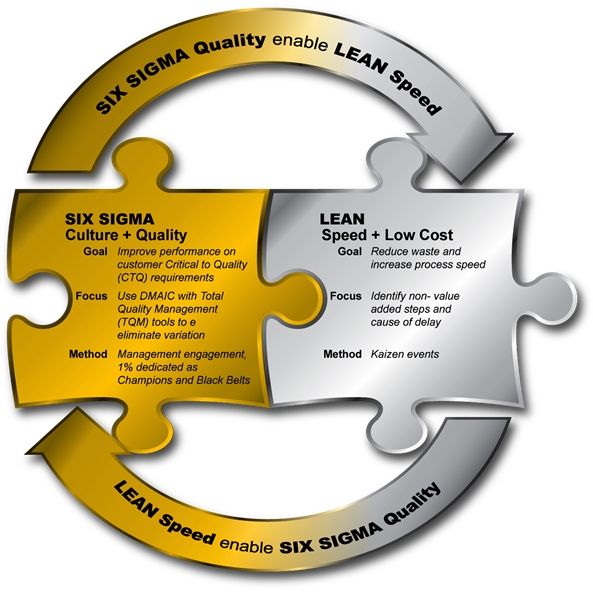 It is very well-known that a far-reaching performance is achieved by the use of Six Sigma and Lean to reduce waste. This in turn reduces cost, an important factor in determining the survival of an enterprise. Manufacturing with Lean in mind, has certain features such as reduced lead times of processes, faster delivery, improved quality of end products, reduction in inventory such as the work-in-process (WIP), low customer service activities, core materials, and products at all customer interfaces. This gives room for incorporating changes.

The standardization of processes and improved service and productivity is now possible. Implementation of Lean depends on the area of application, the culture of that company, the industrial sector it belongs to and its internal customer setup.

The LSS methodology uses a comprehensive methodology incorporating the key elements of both, Six Sigma and Lean, as each stage can gain from the respective techniques. Today, the Six Sigma road map of define, measure, analyze, improve, and control (DMAIC) includes Lean concepts of empowerment and education of everyone in the organization to identify and eliminate non-value adding activities. The integration of the two methodologies attempts to provide empowerment even at the higher level process analysis stages, so that employees have true ownership of the process.

Luminis India' Six Sigma Trainings, thus, make a point of embedding this strategic component into its Champion, Black Belts and Green Belts programs which are clearly aimed at not only developing employees’ commitment to it, but also actively involving a higher level of management.  These implementation would require the management of organisations to identify the key processes in their organization, measure process effectiveness and efficiency, and initiate improvements to the worst-performing processes.

The motto of our Consultancy services is "Implementation & Corporate Deployment Made Easy" for our esteemed clients.