Learn How to Configure Static Route in IPv6 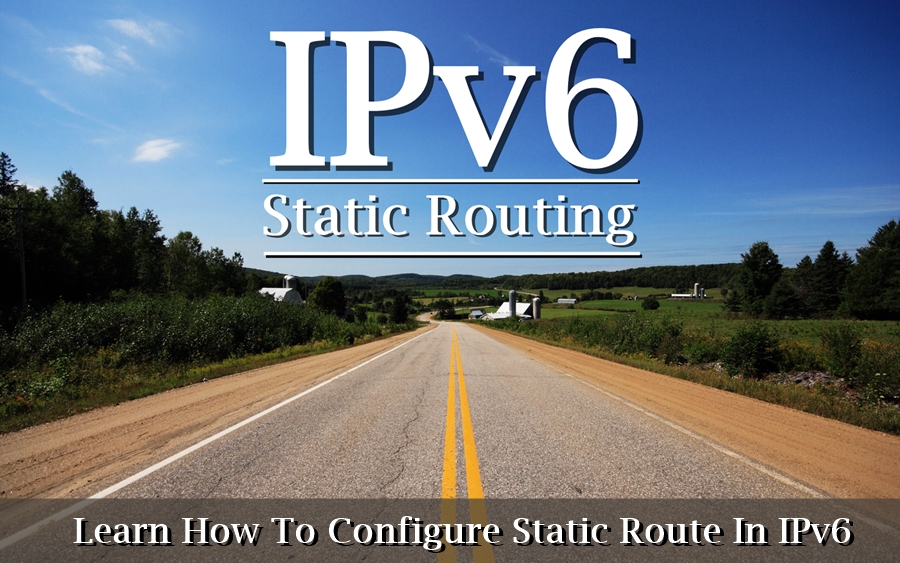 When the traffic traverse from one network to another, the network layer device, e.g., router needs to know about the destination network. It does not matter for the router how it gets the information about that destination, but it should be in the routing table of that router.

We can provide the information about the route to the router, either statically or dynamically. The routing process is almost similar in the IPv4 and IPv6. The routing protocols in IPv6 like RIPng (RIP New Generation), OSPFv3, EIGRP for IPv6, IS-IS for IPv6, MP-BGP4 (Multiprotocol BGP-4) have been redefined with the advance features of the IPv6.

In the small network, we can configure the routes statically on every router. But in the big network or networks, we use dynamic routing protocols which provide the information about the route to the router dynamically. You may want to know--How Does Route Selection Work in Cisco Routers?

The prime objective of the static or dynamic routing is to inform the router about the route or the network which are not connected or directly connected to that router.

Here we will discuss about static route in IPv6.

Enable IPv6 on the Router

When we apply IPv6 address on the interface of a router, that router becomes the member of the FF02::1 (All-IPv6 devices) and this router will be a IPv6 device only and will not be capable of forwarding the ICMPv6 Router Advertisement messages and routing protocols packets.

After applying the command 'IPv6 unicast-routing' on the router, that router will become the member of FF02::2 (All-IPv6 routers). Now this router will be a IPv6-Router having the routing capabilities.

A company, e.g., LuminisIndia.com having five routers and IPv6 addresses are configured on all the routers. All the routers used in the company should be able to communicate with each other. For achieving this objective, we are supposed to use only the static routing, no dynamic routing.

We will design the network of LuminisIndia.com in the GNS3. You can also use Packetracer or other network simulation software for this lab.

For better understanding the concept of IPv6 static routing, we will noted down all the routes which are not directly connected to that specific router.

In this exercise we will get the clear idea of how many IPv6 static routes we need to configure on the specific router and it will also help us in troubleshooting.

From R1 perspective in the current topology, there are four networks which are not directly connected to R1 router. These networks are:

On R1 we need to configure four IPv6 static routes, which are not directly connected to R1 router.

R2’s routes which are not directly connected:

On R2, we need to configure three IPv6 static routes.

In the same manner we need to find out which routes are not directly connected to R3, R4, R5, and R6.

R3’s route which is not directly connected:

R4’s routes which are not directly connected:

R5’s routes which are not directly connected:

R6’s routes which are not directly connected:

Assign the IPv6 address on the specified interface of the router R1 as per the topology and make them 'up', with the commands are given below.

Follow the same procedure for all the routers to assign IPv6 addresses to them and make them ‘up’.
We can verify the assigned IPv6 address on R1. 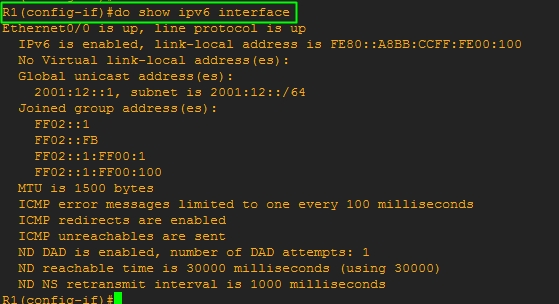 You may use the same command to verify the assigned IPv6 address on each router.

You must make a point to configure this command on each router.

You also can observe that after applying the command 'IPv6 unicast-routing' on the router, that R1 will become the member of FF02::2 (All-IPv6 routers) and able to send Neighbor Discovery Advertisement packets. 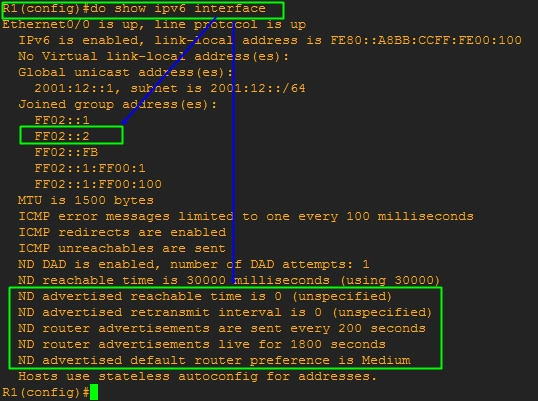 Configure IPv6 addresses and unicast routing on the router R2.

Configure the IPv6 addresses and routing on the rest of the routers. 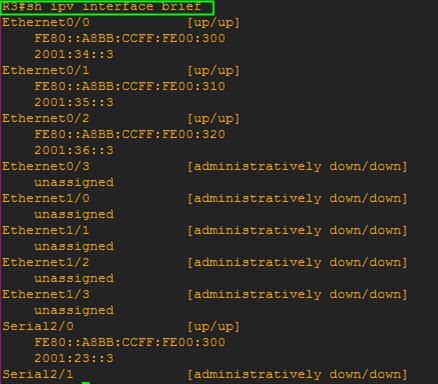 On R1 four routes are not directly connected, we have to configure four IPv6 static routes on R1:

On R2 three routes are not directly connected to it, we have to configure three IPv6 static routes on R2:

Configuration of IPv6 static routes on R3, R4, R5, and on R6 will depend upon how many routes are not directly connected to the router.

On R3 the IPv6 static route configuration will be:

On R4 the IPv6 static routes configuration will be:

On R5 the IPv6 static routes configuration will be:

On R6 the IPv6 static routes configuration will be:

You should consider the 'Connected' and 'Static' routes only, when you count the routes (five routes) on each router. 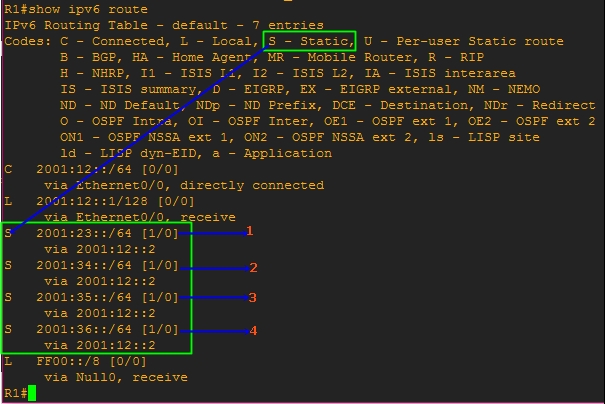 We have four IPv6 static routes and one directly connected route. We can say that all the five routes are available in the routing table of R1.

In the IPv6 routing table of R2 router there are five routes, three are static routes and two are connected routes. 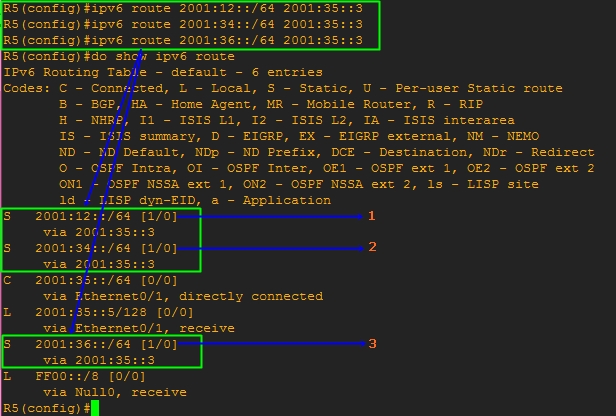 On each router all the routes are available and any router can forward the traffic for any network. We can use ping and traceroute command to check the communication between the source and destination.

We will test the connectivity between the devices, starting from R1 router to R4, R5, R6. We are going to use ‘ping’ and ‘traceroute’ commands for that purpose.

Although static routing is a wonderful option with many benefits, but as the network grows and number of new routers or network or subnets emerge into the existing network, it increasingly becomes difficult for administrator to manage it. The administrator will require to make the changes every time on all the routers, which is a labor intensive task and error susceptive.

In such scenario, the dynamic routing is a much better option. In dynamic routing the administrator need to advertise the networks which are only directly connected to the particular router.

We may consider the following advices while implementing the IPv6 static route:

Can we do the load-balancing with static routing in IPv6?

What are various other situations, where do you want to recommend the static routing, w.r.t., IPv6?